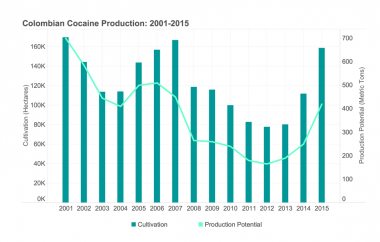 This Policy Brief presents data from the Office of National Drug Control Policy(ONDCP) and the United Nations Office on Drugs and Crime (UNODC) demonstrating increased coca cultivation in Colombia. The brief questions whether the United States is the target for this new coca, but notes that our diminished ability to detect emerging drug trends renders this an unanswerable question. Ultimately, the brief seeks to raise public awareness of the Colombian cultivation and offers suggestions for improving the detection of emerging drug trends, particularly with respect to cocaine. The brief presents "obvious" next steps -- (1) Funding the Arrestee Drug Abuse Monitoring (ADAM) Program, (2) Restoring ONDCP's Research Funding, and (3) Dedicating Funds for Quest Diagnostic Workplace Drug Testing Data-- as well as more controversial next steps.

Download the PDF: Coca Cultivation Makes a Comeback in Colombia

Introduction
Coca cultivation in Colombia is up—way up—and it is not clear why. This increase begs the question: do Colombian drug traffickers see something that U.S. policy makers do not? Is there a reemergence in the demand for cocaine within the U.S.? Is this a deliberate attempt by Colombian traffickers to increase the demand in the U.S.? Or do traffickers have their eyes on other markets?

The honest answer is that no one knows. Not knowing is one thing, but not being able to find out is another. Arguably, our ability to spot emerging trends in the U.S. is diminishing, creating a situation where policy makers will be forced to be reactive rather than proactive in stemming the possibility of increased demand for cocaine. This policy brief seeks to raise public awareness of Colombian cultivation and suggest options for improving the detection of emerging drug use trends—with emphasis on cocaine consumption.

Background
According the Office of National Drug Control Policy (ONDCP), coca cultivation increased by 104 percent from 2012 to 2015.1The most recent analysis by the United Nations Office on Drugs and Crime (UNODC) also shows significant growth—UNODC estimates that cultivation in-creased by 39 percent between 2014 and 2015, following a 43 percent increase in 2014.2 Cultivation in Peru and Bolivia, the two other countries in the Andes that cultivate coca, are not showing any significant changes in growth to warrant immediate concern. But ONDCP finds that 95 percent of the cocaine that enters the United States comes from Colombia. And according to the latest National Drug Threat Assessment, Drug Enforcement Administration’s Cocaine Signature Program continues to show that most cocaine consumed in the United States is of Colombian origin.3

Is Cocaine Making a Comeback?
To answer this question, we first need to determine if cocaine availability and use is on the rise. Increases in initiation, or first-time use, usually precede increases in prevalence, or regular use.5 Information on initiation is reported in the National Survey on Drug Use and Health (NSDUH), but its reporting comes with a lag—making it less effective as a leading indicator. The latest NSDUH shows that drug use initiation (measured as the number of past year new initiates) did increase between 2013 and 2014, from 601,000 to 766,000. This increase was statistically significant. The level for 2013 was statistically similar to levels reported since 2008 (ranging from 623,000 to 724,000), but is much less than the roughly 1 million new initiates each year between 2002 and 2007. There were 1,530,000 regular users of cocaine in 2014, but if initiation does continue to rise (new data should be available from the NSDUH later this year), that figure will eventually grow, as will rates of dependence and abuse caused by new users moving into regular use.

Knowing about heavy users is important as they account for the majority of cocaine consumed. In recent years, this series has seen substantial methodological improvements and indicates that the number of heavy users is declining. This decline in part explains why cocaine consumption fell by about 50 percent between 2006 and 2010.7,8 The other possible contributor is the reduction in cocaine availability associated with the substantial decline in coca cultivation in the mid-2000s resulting from aerial spraying and manual eradication efforts. Given this possibility, the cessation of aerial spraying of coca in 2015 does not bode well for increased coca cultivation.

Another indicator of drug use trends is the Quest workforce drug testing data.9 The National Drug Threat Assessment was the first source to suggest that cocaine consumption was dropping in 2007.10 Quest data are the canary in the coal mine indicator that should continue to be watched for emerging trends. Given that it was the first source to identify the remarkable decline in cocaine consumption that began in 2007, it is logical to expect that it will detect a reversal. Quest data should be closely monitored to detect emerging drug trends.

Are Other Markets the Intended Target?
If the United States is not the intended target, then what other markets are Colombian traffickers pursuing? Unfortunately, surveys of cocaine use in other nations often are conducted only sporadically, if at all, and not consistently enough to establish trend data. So the simple answer is that we do not know if cocaine consumption is on the rise in these markets. In its annual World Drug Report, the UNODC publishes global cocaine consumption figures based on survey data. The 2016 report stated that, while there has been a net 30 percent increase in global cocaine use from 1998 to 2014 (the most recent year), growth in users is attributable to population growth. In this Hemisphere, the Inter-American Drug Abuse Commission (CICAD) also reports drug use trends. However, a recent reconfiguration of CICAD by the Organization of American States has significantly weakened the organization’s capacity to gather systematic data, thereby leaving this Hemisphere without any means to evaluate what is happening in Colombia. In Europe, the European Monitoring Center for Drugs and Drug Addiction (EMCDDA) is the body analyzing illicit drug markets, but their cocaine consumption-related information is limited. Only four countries—Spain, France, Finland and the United Kingdom—in their 2016 European Drug Report submitted enough data to analyze cocaine use information from 2000 onward. The EMCDDA reports that in Spain and the United Kingdom, new cocaine use among young adults has declined since 2000 (with a spike in 2008), while Finland and France have experienced a marginal increase from near zero consumption levels.11 Looking across UNODC, CICAD, and EMCDDA data, it appears that non-U.S. markets are not seeing net increases in cocaine use.

Monitoring Emerging Trends
For decades, cocaine was viewed by the supply reduction/law enforcement community as the primary drug threat, which resulted in an extensive infrastructure to detect and respond to cocaine consumption. However, this infrastructure may be a bit rusty. Data systems used by ONDCP to look for emerging trends have vanished. One such data system was the Arrestee Drug Abuse Monitoring (ADAM) program that surveyed arrestees in booking facilities about their frequency of drug use for many categories of drugs and included a urine test as a biological confirmation. ADAM was last conducted in 2013. At one time, as many as 35 cities were in ADAM. ONDCP even proposed expanding ADAM to as many as 50 cities in the President’s FY 2000 budget request.12 ADAM enabled ONDCP to calculate heavy drug users critical to its estimates of consumption-based estimates reported in What America’s Users Spend on Illicit Drugs.

Another source of knowledge is ONDCP’s research program that funds such efforts like What America’s Users Spend on Illicit Drugs. Its ability to sponsor special research studies to inform policy has all but vanished. The Administration’s last request for resources for its Counter Technology Assessment Center (CTAC)—for technology related research—occurred in the FY 2010 Congressional budget request; spending for policy research as reported in ONDCP budget ended in FY 2011 ($1.3 million). Given its position as the federal government’s focal point for federal drug control policy, not having resources to engage the research community or grow new information surveillance systems puts national drug control policy formulation at risk.

What Should be Done Next?
A recent study estimates an average time lag of 24 months before cocaine harvested from coca reaches the streets of the United States.13 If the dramatic increase in coca cultivation does translate into increased cocaine availability in the U.S., data systems must be in place to detect new consumption so policy and programs managers can be on the ready. The obvious next steps include:

More controversial next steps include:

Conclusion
The U.S. drug policy infrastructure is almost singularly focused on opiates, and for good reason. But that does not mean that it should lose sight of other emerging drug use trends. The sharp increases in coca cultivation cannot be without consequence to cocaine availability in the world-wide market. The question is: which market is being targeted by Colombian traffickers? If the past is prologue, then the U.S. should be paying close attention. But reductions in research funding have left cocaine monitoring systems dangerously out of date. Rather than let our ability to detect emerging drug trends continue to wane, this policy brief offers recommendations for the federal drug policy community to consider soon— so we can be prepared to detect a possible resurgence of cocaine use.