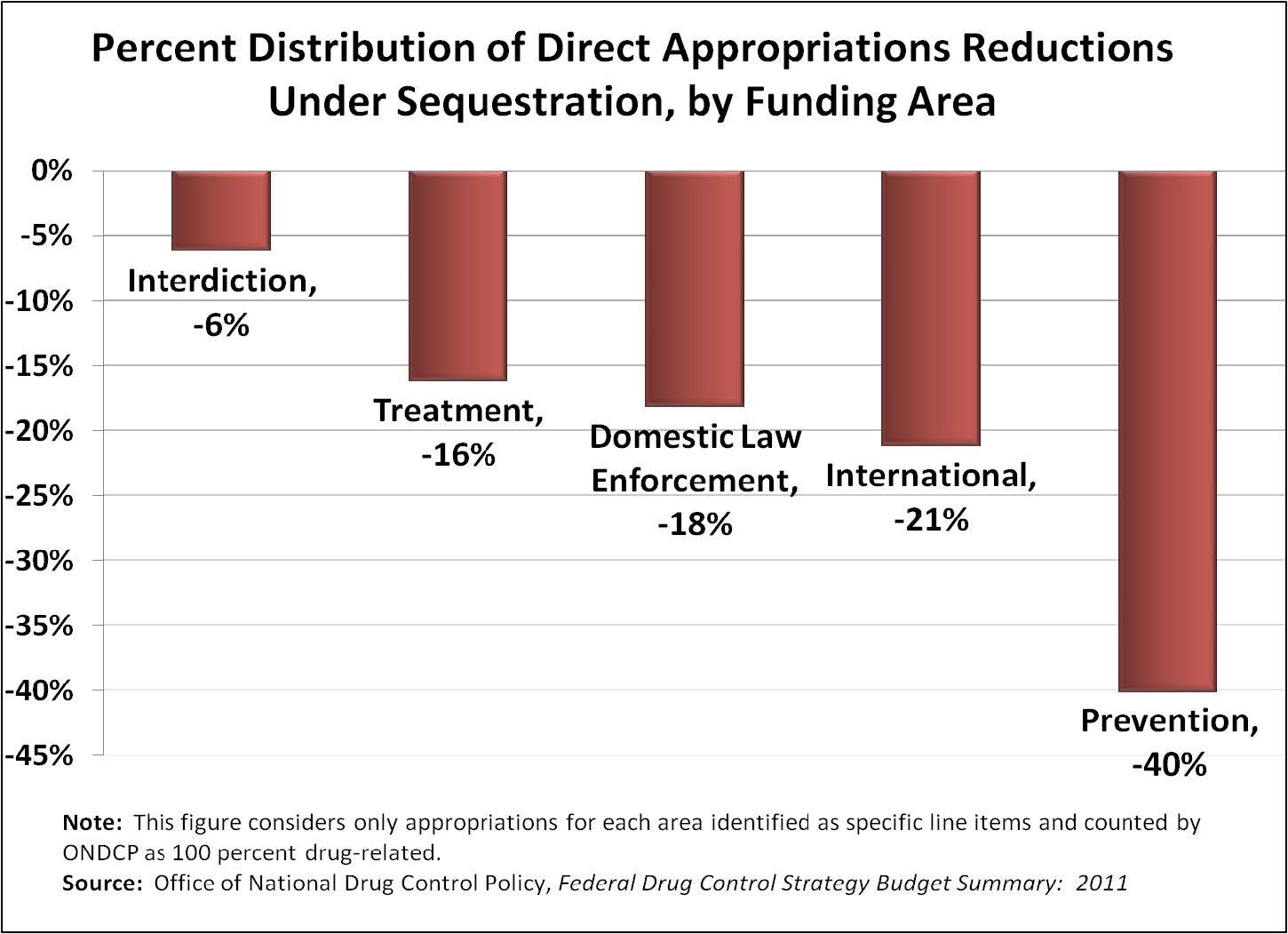 With the failure of the Joint Select Committee on Deficit Reduction to reach an agreement, this Policy Brief examines the effects of a $1.2 trillion sequestration (automatic cut) on the federal drug control budget. Slated for implementation beginning in 2013, Carnevale Associates' analysis finds that the proposed cuts would be much more detrimental to demand reduction programs than to supply reduction programs. The disproportionate impact on demand reduction programs may impede the Obama administration’s stated aim of implementing the public health approach promoted in its National Drug Control Strategy.

Download the PDF: The Federal Drug Control Budget Under Sequestration: Prevention Most Affected

Overview
With the failure of the Joint Select Committee on Deficit Reduction (the Super-Committee) to reach an agreement on how to trim $1.2 trillion from the federal budget over the next decade, the future of our national drug control policy is once again unclear. If members of Congress fail to reach a compromise on spending cuts, the sequester (automatic cut) will be implemented in 2013 as a series of across-the-board cuts resulting in $1.2 trillion in budget savings through 2021. Our analysis of the impact of the sequester concludes that the proposed cuts would be much more detrimental to demand reduction programs than to supply reduction programs. The disproportionate impact on demand reduction programs will impede the Obama administration’s stated aim of implementing the public health approach promoted in its National Drug Control Strategy.

For those other agencies that do not receive explicit line-item funds for drug-control activities from Congress, the potential effect of a sequestration is less clear. Since their drug spending is based on analyst estimates of resources that support drug-related activities, a sequestration would not directly affect available resources. For example, if an agency estimates that 20 percent of its workload reflects efforts to address drug control activities, then it will report to ONDCP that 20 percent of its appropriations should be counted in ONDCP’s drug control budget. Under the assumption that a sequestration would affect all of this agency’s activities equally, a 10 percent sequestration would reduce the level of resources reported to ONDCP by 2 percent (calculated as 10 percent times 20 percent)—much less than sequestration. However, the effect on drug control could be smaller or larger if agency leaders have latitude to implement cuts unevenly within their agencies.

The Five Functional Areas of the Federal Drug Control Budget
Since it became an operating agency in 1989, ONDCP has presented its estimates of federal drug control spending in five major functional areas: prevention, treatment, law enforcement, international or source country programs, and drug interdiction. Using the Obama administration’s FY 2012 drug control budget request for our analysis, we estimated the impact of a sequestration on each of the five functional areas. We found the following:

These estimates are based on ONDCP’s FY 2012 request for drug control as reported in its Federal Drug Control Strategy Budget Summary: 2011. Our findings indicate that an automatic across-the-board cut from a sequestration would reduce resources that ONDCP identifies as essential components of its National Drug Control Strategy. In addition, the area being most promoted by ONDCP—more resources for prevention—would be reduced the most by a sequestration. Most of these resources are funds appropriated to the Substance Abuse and Mental Health Services Administration’s (SAMHSA) Center for Substance Abuse Prevention and to ONDCP for the Drug Free Communities Program.

Figure 1 shows our findings. Of a total dollar reduction in direct appropriations, 40 percent would be cut from prevention and another 16 percent would be cut from treatment. Together, these two areas constitute what ONDCP reports as spending for demand reduction—totaling 56 percent, or the majority of the dollar cut. With respect to supply reduction programs, source country programs get cut by 21 percent, domestic law enforcement gets cut by 18 percent, and interdiction is cut by 6 percent. In total, supply reduction appropriations sustain 44 percent of the direct dollar cut.

Conclusion
The mandatory $1.2 trillion reduction in federal spending that is scheduled to begin in 2013, and continue to 2021, will limit ONDCP’s effort to reform national drug control policy. ONDCP’s national drug control strategy aims to increase public health and safety through a public health approach. Sequestration’s impact on the federal drug control budget will result in much more emphasis on supply reduction programs that seek to curb America’s demand for illicit drugs by reducing access and availability to those drugs that cross our borders each year. Unless Congress or the administration intervenes with a more rational approach to deficit reduction, our nation’s drug policy and the budget to implement it will be substantially at odds.