OVERVIEW
United States national drug control policy is historically reactive, addressing the latest crisis long after it is established. Prevention is the best policy tool available for addressing emerging drug problems, but it is most effective before problems become well-entrenched. Three emerging trends could prove damaging if ignored: (1) cocaine use by young adults is increasing and cocaine-involved overdoses have exploded, (2) heroin and synthetic opioids are driving opioid overdose deaths, and (3) the country is increasingly accepting of marijuana. In light of these trends, we offer five recommendations to develop prevention infrastructure and facilitate proactive solutions.

Opioid misuse and its consequences have been at the forefront of drug policy for several years. The growing numbers of opioid-related deaths demonstrate that the crisis rages on, despite some notable policy successes. Yet the opioid crisis has not remained stagnant and it is not the only drug policy challenge. Rising cocaine use is leading to more cocaine-involved deaths, and attitudes toward marijuana continue to soften as legal changes increase availability. The factors that contribute to use – price and availability, perceptions of harm and social acceptance, and perceived benefits – wax and wane, affecting society’s appetite for specific drugs. These changes cause new trends and, potentially, new epidemics. Several drugs are now emerging as causes for concern – and for immediate policy action.

COCAINE EMERGING
In August 2016, Carnevale Associates identified rising Colombian coca cultivation and increasing cocaine initiation (first-time use) as evidence of an emerging trend of cocaine use in the United States. The evidence has only strengthened in the interim. Use by young adults is also on the rise and cocaine-involved overdoses have exploded.

Colombian coca production more than tripled between 2012 and 2016 – reaching 910 metric tons of export-quality cocaine. [1] Over the same period, prices have fallen 23 percent (from $215/gram to $165/gram) while point-of-sale purity increased nearly 20 percent. This paired change indicates a rising street supply of cocaine. 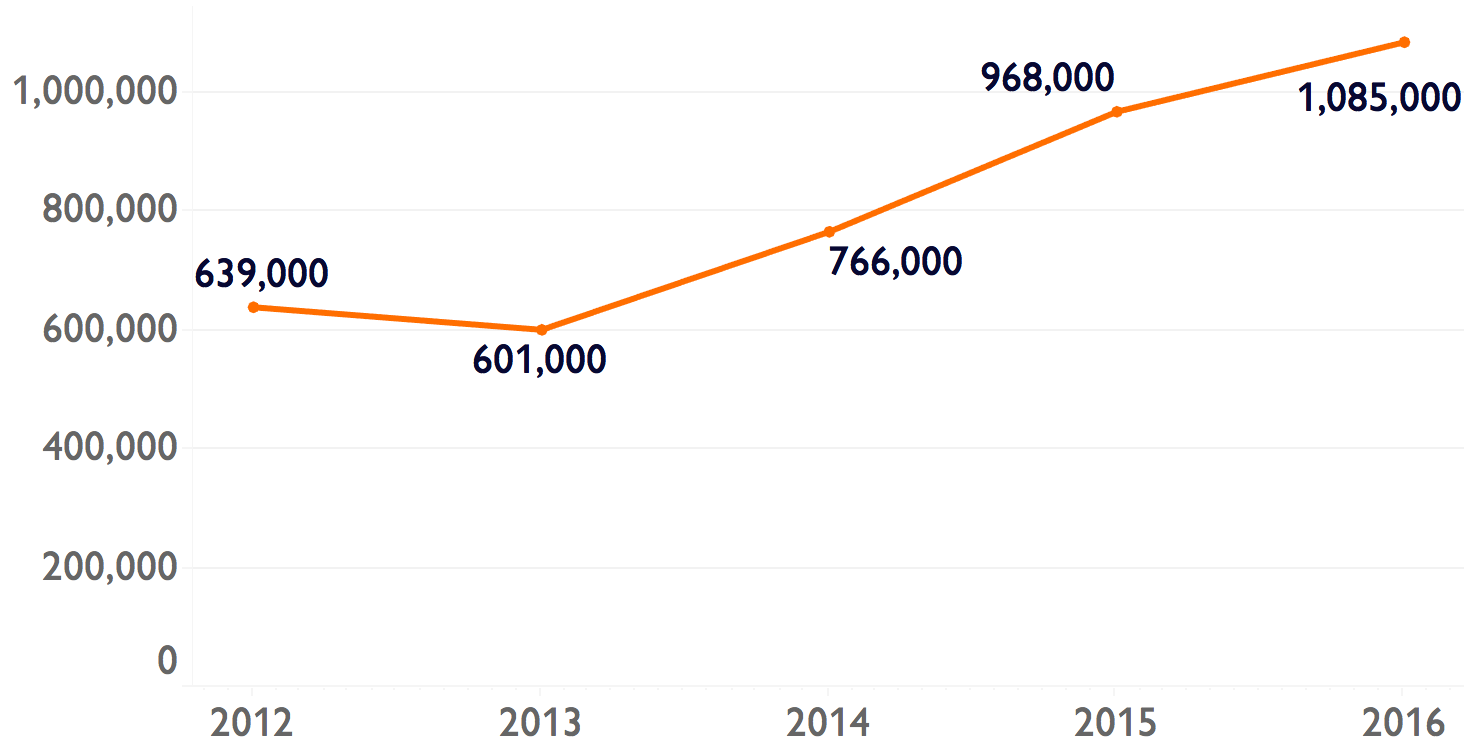 Data also show rising numbers of initiates and increased use among young adults. The rate of past-year cocaine users among those aged 18-25 rose nearly 22 percent between 2012 and 2016, based on the National Survey on Drug Use and Health (NSDUH). First-time use of cocaine also rose by 70 percent over the same period – reaching 1,085,000 initiates in 2016, a return to numbers not seen since 2002-2007. Rising initiation rates are often the first sign of further increases in regular use.

Greater consequences from this increased use are already observable. Rates of fatal overdoses involving cocaine increased 135 percent from 2012 to 2016, according to the Centers for Disease Control and Prevention (from 1.4 per 100,000 to 3.2 per 100,000). The rise in cocaine use is also interacting with the opioid epidemic. Fatal overdoses involving opioids and cocaine increased 63 percent over the same period. Policymakers must address this cocaine trend while it is emerging.

SYNTHETICS & HEROIN DRIVING THE OPIOID EPIDEMIC
The current opioid epidemic is not new. It began with prescription opioid misuse, but heroin and synthetic opioids—especially illicitly manufactured fentanyl—are emerging as a growing problem. Fatal overdoses involving opioid medications (e.g., oxycodone, hydrocodone, methadone, etc.) rose 16 percent from 2012 to 2016 – reaching 19,354 fatalities. But fatal overdoses involving fentanyl and fentanyl-analogues increased by a staggering 639 percent over the same period. In 2016, there were actually more fatal overdoses involving fentanyl and its analogues (19,413) than there were involving opioid medications (19,354). The Drug Enforcement Administration’s 2017 National Drug Threat Assessment also reports increased illicit fentanyl production, indicating that potency alone is not likely to be driving the rise in overdose deaths. Meanwhile, heroin has also surged since 2012. Fatal overdoses involving heroin increased 162 percent – reaching 15,469 in 2016. [2] And the number of past-year heroin users increased from 669,000 in 2012 to 948,000 in 2016, according to the NSDUH.

Policymakers have focused on opioid medications, with some positive results. The rate of past-year nonmedical use of prescription pain relievers declined from a high of 4.9 percent in 2009 (12.4 million individuals) to 3.9 percent in 2014 (10.3 million individuals). [3] But despite that improvement, rates remain above pre-epidemic levels. And the number of fatal opioid overdoses is still rising. 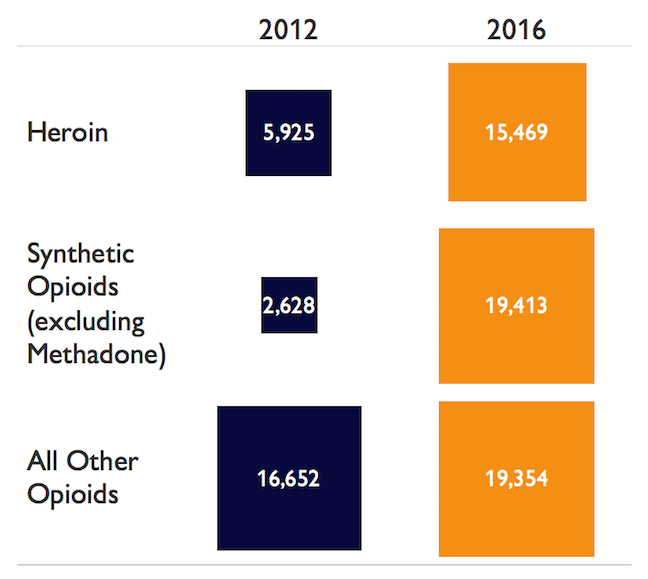 The dramatic rise in fatal overdoses involving illicit opioids [4] requires a solution. But most of the successful prevention strategies employed for opioid medications are not applicable to illicit substances – Prescription Drug Monitoring Programs, prescriber education, abuse resistant drug formulations, and prescribing/dispensing policies do not work for heroin or illicit fentanyl. Ironically, successful prevention measures may offer one explanation of the current shift away from prescription opioids toward heroin and fentanyl. Prevention should adapt by expanding efforts to include more education and public awareness along with a continued expansion of harm reduction strategies, such as overdose prevention and linkage to treatment.

MARIJUANA & STATE LEGALIZATION
Policymakers must also confront the spread of state-level legalization of marijuana– even as it remains illegal under federal law. Despite signals from the Trump Administration, the trend of state-level legalization appears to be continuing. So far, nine states and the District of Columbia have legalized recreational use, affecting over 21 percent of the U.S. population. Another seven states have active efforts to obtain ballot measures for legalization referenda in November 2018, and at least one state (New Jersey) has an active effort to legalize through the legislature. In November 2016, Carnevale Associates highlighted the need to adjust the policy debate to reflect changes in state law and public opinion. 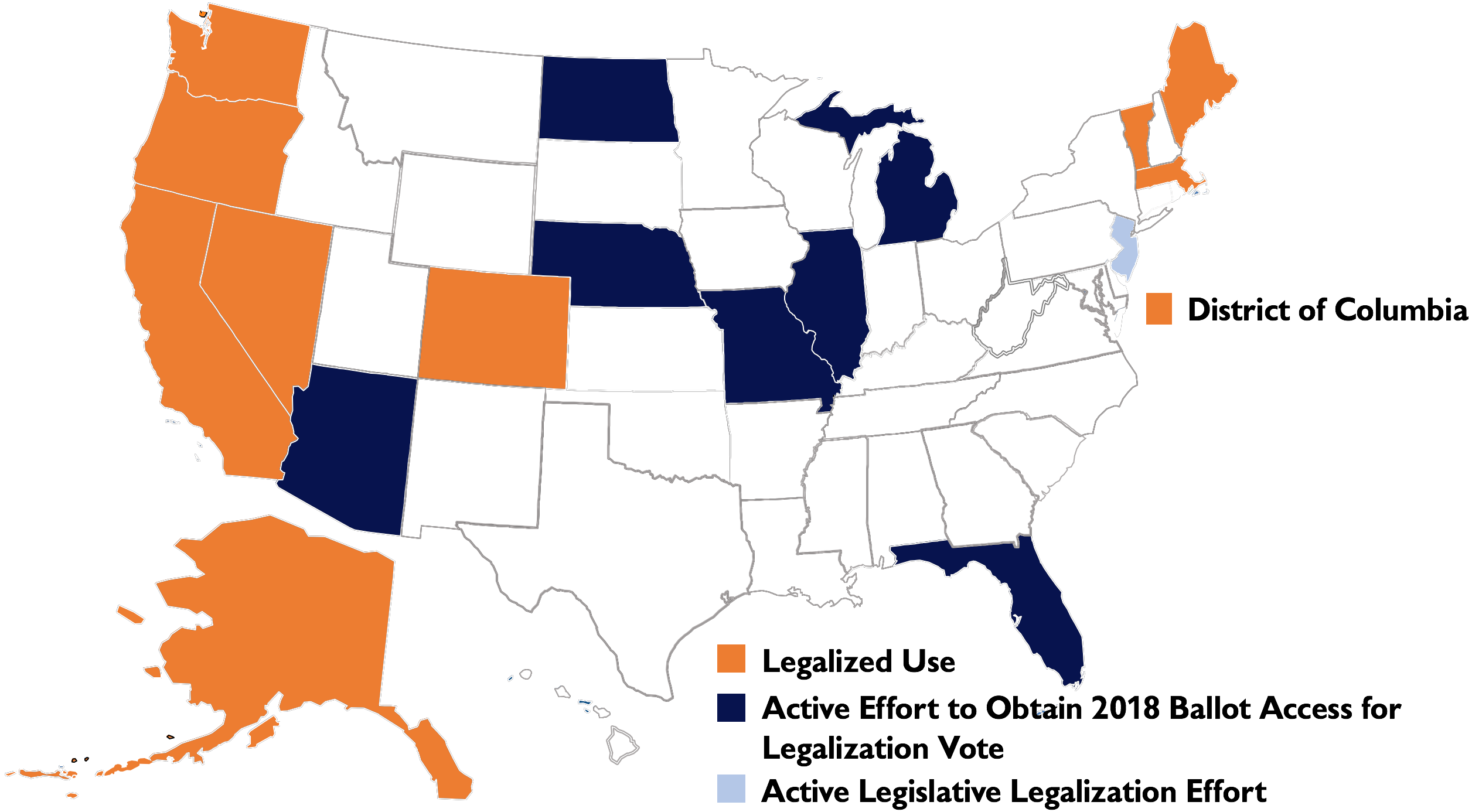 Prevention stakeholders should consider whether, when, and how to become involved in the legalization debate, including whether they wish to help influence the regulatory framework. [5] Policymakers must then determine how to maximize public health priorities within any framework that is enacted. Prevention stakeholders must also be aware of weakening protective factors against marijuana use (especially perceptions of harm) among youth and develop strategies to address this shift, regardless of the outcome of state-level legalization.

RESOURCE LIMITATIONS: THE COMPLICATING FACTOR
Prevention has notoriously limited resources. Declining funding for prevention [6] likely contributes to the lack of epidemiological data and a dearth of evidence-based strategies. Prevention has also been hurt by the termination of surveillance systems for budgetary reasons, such as the Arrestee Drug Abuse Monitoring (ADAM) program and the Drug Abuse Warning Network. With surveys like the NSDUH and Monitoring the Future limited by inherent data lag, it is now much more difficult to identify and respond to emerging trends. Yet even when trends are identified and targeted, there is often insufficient research to inform policies and programs. There are no easy solutions to these resource limitations but, as with most policy, proactivity is more efficient than reactivity.

PREVENTION RECOMMENDATIONS
Improvements to the prevention infrastructure are often simple but have proven politically difficult. They are increasingly important in light of the newly emerging trends.

Each of the emerging trends we consider—the return of cocaine, the shifting opioid crisis, and the state legalization of marijuana—is unique; yet, each merit greater attention from drug control policymakers and preventionists. Effective prevention is the best chance to avoid the catastrophic effect of drug epidemics. Policymakers must examine the context of each trend, understand the ongoing prevention efforts, and build on those efforts in effective ways. Though the emerging trends are specific, our recommendations are not. Drug trends evolve over time. With national-level assistance, local stakeholders should assess local needs and drive local efforts to prevent drug epidemics. Enhancing prevention infrastructure will improve the ability to address these emerging trends and detect other troubling patterns before they become larger problems.